Located south of St. Paul, this region is a unique confluence of small businesses and large corporations, growing cities and agriculture. Interstates and country roads criss-cross our region, connecting Eagan to Rosemount to New Prague to Zumbrota. Whether we live or work in Chaska, Red Wing, or Northfield, we are all affected by the inconvenience and increasing threat of aging infrastructure. On the positive side, everyone here also benefits from the real economic effects of strong roads, bridges, water treatment, ports, and aviation.

Our legislators need to hear from us. Click the Raise Our Grade button and let them know you support investment in our infrastructure.

Check out a list of projects that require funding in our district.

A Short Story Of Infrastructure: When the Sky Exploded

Formed in December of 1941, Civil Air Patrol was originally envisioned as a way to mobilize America’s civilian aviators for national defense in case of war. A week later, Pearl Harbor was bombed. By January, CAP pilots were flying patrol flights along the East Coast, reporting and preventing German submarine attacks on merchant vessels.

Today, CAP is a national organization with 60,000 volunteer members. It was recently made an auxiliary of the US Air Force. In every state of the nation, CAP provides aerospace education and cadet programs. It can also serve, by request, in emergency situations such as disaster assessments and missing persons situations. Minnesota’s Civil Air Patrol has 18 aircraft, and 23 squadrons.

Minnesotans have a healthy respect for severe weather—particularly for tornadoes with their unpredictable and brutal force. Tornadoes can form anywhere if the right conditions exist. But strong force winds, lightning, and flooding all bring the potential risk of catastrophic damage to personal and commercial property. No part of the state is untouchable.

On the evening of September 20, 2018, storm clouds moved forebodingly across the sky in south central Minnesota. A tornado siren wailed, slicing through the humid air. It was not a drill. 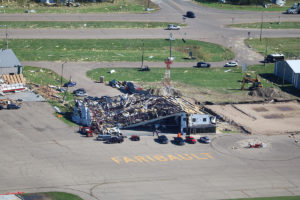 Major Tom Fitzhenry of Minnesota’s Civil Air Patrol (CAP) was stationed at an encampment near Cannon Falls and learned of the storms while he and other CAP members were conducting a cadet emergency training mission. Twenty-four tornadoes were tearing across Minnesota and Wisconsin, leaving devastation behind.

Looking down, he could see the twisting path of the tornado over the landscape and the shocking destruction of straight force winds. Farms were obliterated, roads were blocked by fallen trees, highways were littered with debris, and homes and businesses were destroyed. But it was the damage to the Faribault Municipal Airport that took his breath away—hangars totaled and airplanes smashed. 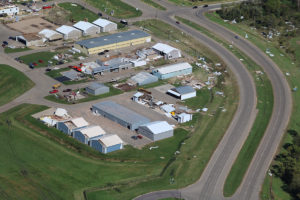 The State of Aging Infrastructure

The September 2018 weather events were a warning. Aging infrastructure can be brought down by age and neglect, but it can also be affected by extreme weather. Damage to highways, ports, dams, airports—especially old structures—endangers lives and businesses, hampers communications, and impacts commerce. Even at relatively low measurements of EF-0 to EF-2 (EF-5 is the most destructive level), the September ‘18 tornadoes packed serious force. 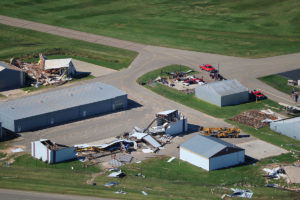 U.S. spending on infrastructure has lagged for decades, leaving old structures in place by default. These weakened systems are inadequate for current weather extremes and susceptible to damage.

Investing in well-engineered and technologically up-to-date infrastructure adds an extra layer of safety for Minnesotans. It can improve the economy and our safety.

Tom Fitzhenry continues his volunteer work with Minnesota’s Civil Air Patrol, training young cadets (12-21) as they serve local communities and learn about airplanes and emergency services. When notified—by law enforcement agencies, news/weather organizations, or the military—he and other CAP pilots are ready to complete damage assessments…take photographs…or even help search for a missing child. “We’re so versatile,” he said. “If you have something you need, explain it and we’ll find a way to do it.” 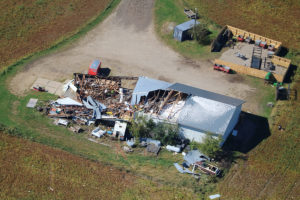 It’s likely that CAP will have more weather-related missions in the future. Extreme weather will likely lead to damage in road, rail, airports, and ports. Only adequate infrastructure funding will enable Minnesota to rebuild, replace, and repair damaged systems.

Funding For Quality of Life

Every part of our infrastructure contributes to the Minnesota quality of life. It ensures our ability to compete in the world—and to live with convenience and safety. We must have infrastructure spending now to maintain our quality of life and to assure a good life will be possible for our children and grandchildren in the future. We must Raise Our Grade, Minnesota. 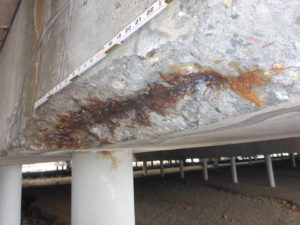